Phoenix Scientific Industries Ltd (PSI) was founded thirty years ago with the goal of developing gas atomised metal powders for the then new Hot Isostatic Pressing (HIP) industry. Since then the company has continuously developed its atomising technology in response to the evolving application areas for gas atomised metal powders, notably in the Metal Injection Moulding and the more recently developing Additive Manufacturing industries.

PSI’s founding mission was to convert the theories of materials processing into engineering plants for the production of advanced materials. The company now produces machines for atomising metal to powder, PVD systems for turbine blade coatings, melt spinners for magnetic materials and CVD furnaces for ceramic fibrereinforced composites. However, the company is chiefly known for its work in metal atomisation and, in particular, for its high performance gas atomisers for the production of quality, fine and spherical metal powders. Formed in 1987 by Bill and Jan Hopkins and backed by Lucius Cary of venture capital company Oxford Technology, the company has grown from building small research machines for universities to supplying multi-million dollar production systems for large corporations. Owing to the founders’ previous international business experience and in recognition of the fact that such a specialist business would need to address the wider world market, the management team addressed this challenge from the outset.

Today, the company has installed systems in twenty-one countries on all seven continents with the exception of Antarctica, a market still proving hard to crack. Thirty years ago the Powder Metallurgy market was dominated, at least in terms of volume, by irregular water-atomised steel powders for automotive components and tungsten carbide for machining tools, both materials being suited to the press and sinter technology then available.  Spherical and irregular powders of the type made, respectively, by gas and water atomisation were used in thermal spray technologies for wear and corrosion resistant coatings. The application that attracted our attention was their use in Hot Isostatic Pressing [HIP]. Previously, we had worked in metals R&D and, being tasked with developing new alloys and components especially suited to the HIP process, had noticed the limited availability of and high price premium commanded by the very pure [low oxide] gas atomised spherical powders required for HIP.

The ability to produce large, nearnet-shape critical components such as aero engine turbine discs from powder offered an exciting alternative to the costly and cumbersome cast and forging route used conventionally. However, the catastrophic in-flight failure of a PM disc, which was attributed to uncertain powder quality, emphasised the need for a step change in the approach to the manufacture of gas atomised powder if PM was to be used in critical engineering applications. 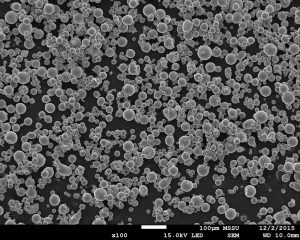 At around the same time Nick Grant, a professor at MIT, had developed the concept of ‘close-coupled’ gas atomisation. Until then, metal powder had been produced by generating a free-falling stream of molten metal from a furnace and aiming jets of water or gas in the general direction of that stream. If inert gas was used and the melt was ‘clean‘ in terms of gas and refractory inclusions, this was a perfectly good way of making spherical metal powder suitable for HIP. This process was, however, inherently inefficient in terms of usage of the kinetic energy of the atomising fluid and produced only coarse (mainly above 50 μm) powder, while the industry wanted finer powder for a range of new applications. In close-coupled gas atomisation, the atomising gas is aimed directly at the end of the ceramic tube from which the melt emerges.

This enables the energy of the gas stream to be absorbed by the melt stream much more readily, greatly increasing fine powder yields. In some cases, the powder distribution can contain more than half of its weight less than 15 μm in diameter; and this was what the newly emerging Metal Injection Moulding industry required. If the technology was to flourish, however, costs needed to be reduced.  These requirements defined the type of atomiser that PSI decided to build. Clean melts were required as this cleanliness would translate into clean powder and therefore vacuum processing of melt was required. When not operating under vacuum the whole process needed to operate under inert gas or nitrogen and take place in a highly polished stainless steel process plant more typical of the pharmaceutical industry than that found in the fume-filled caverns of the foundry industry. To produce the fine powder required by the MIM industry, close-coupled atomising nozzles had to be developed that were both efficient and reliable. 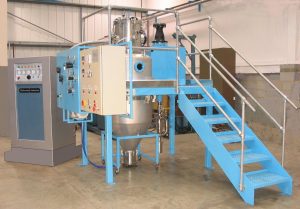 PSI’s first atomiser, the Hermiga Mini, produced a few kilograms of powder and was intended to be used by universities and in the research departments of engineering companies for R&D into fine powder applications.  A sales visit to Japan had uncovered a market demand for these R&D atomisers to be accommodated within the four metre repeat distance between floors in a typical office block, because factory floor space in Japan was so expensive due to the high price of land.  The challenge, therefore, was to build an atomiser that would fit a small office space. Typically, atomisers need to be tall to give the powder particles plenty of time to cool down as they descend downwards in the process chamber. In addressing this challenge, the first generation of Hermiga Minis was born. The standard Hermiga range of vacuum/inert gas atomisers has developed over the years and now includes production-scale units capable of outputs of over 2,000 tonnes per year, whilst still retaining the performance and quality capabilities of the smaller R&D and pilot-scale atomisers. Now that these capabilities are considered standard throughout the range, recent development activity at PSI has been focused on the capital expenditure and operational expenditure considerations of the company’s atomiser users. Understanding companies after they have satisfied themselves of the powder quality characteristics, are concerned about their return on investment and the unit cost of ‘in-size’ powder, Detailed engineering discussions are thus carried out to ensure that the ’sweet spot‘ in atomiser specification is achieved to match the customer’s downstream production requirements. Over the last decade PSI has therefore devoted much of its resources to the development of features designed to achieve these objectives.

The use of heated atomising gas

When the atomising gas is heated to, for example, 500°C, median particle size may be reduced from 20 μm to 15 μm in a steel powder. This may be of no great import to a manufacturer of powder intended for Additive Manufacturing or HIP, but it transforms the economics for a MIM powder producer.

Most atomisers are still built for batch production, the comparison being ingot production of steel compared to Concast.  Considering that the atomising stage of the machine cycle of load-melt preparation – atomise – cool down may only represent 25% of the total cycle time, it is essential to turn the unit around quickly. To this end, systems have been developed to ensure both a fast change of consumable refractories in tundish design and the rapid cooling of collected powder and chamber internals to allow operator access to unload product and prepare the next melt.

The ability to quickly and thoroughly clean the complete system between compositional changes is essential when a company is looking to get maximum value from its investment. Rapid access to the atomising and melt chambers in the Hermiga units is facilitated by a hydraulic clamping system.

The objective of tandem melting systems is to keep the capital intensive part of the atomiser system fed with molten metal for the highest proportion of the duty cycle as is possible. The use of alternatively pouring melting furnaces whilst maintaining the vacuum and inert gas environment improves production economics markedly. 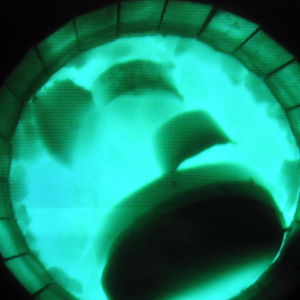 Over the last few years PSI has invested heavily in ’cold crucible‘ technology, meaning the ability to melt and atomise reactive metals such as titanium. Cold crucible or Induction Skull Melting (ISM) – the preparation of the melt in water cooled copper crucibles – is technically complex but feasible, and several atomisers based on this technology are now in operation. PSI believes that the only viable method of producing quality titanium powder at a price to enable its use outside of aerospace and into the automotive and medical sectors is by the use of low-cost titanium feedstocks and cold crucible techniques to prepare and refine melts in preparation for atomisation.  In the past five years, Additive Manufacturing has grown at a rapid rate in the field of titanium and it has become apparent that CP and ’6/4‘ grades of titanium will need modification to alloy compositions to meet the special solidification characteristics encountered in AM processes. To this end PSI have developed cold crucible equipment to enable the production of novel titanium alloys by the continuous casting and extraction of circular billets. This meets the demand for meltstock of novel compositions that the primary titanium manufacturers are not currently ready to address.